Henrietta Hobby
Henrietta Hobby is a Motorhome not a person! However it does carry two people, Martin and Jane, from Somerset, England. We had always talked of exploring Europe once we retired but Martin's unexpected redundancy convinced us to take the plunge in our early 50s. After completing a 14 month Odyssey in Europe in 2007/8 we continue to explore Europe in a series of Sojourns. In Autumn 2014 we are acting as support for a 1200km charity bike ride from Somerset to Portugal. 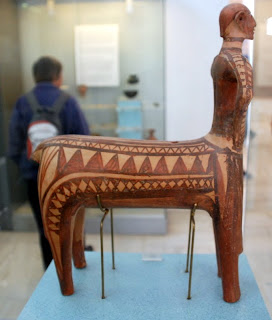 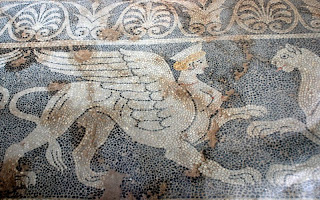 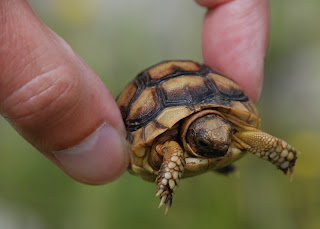 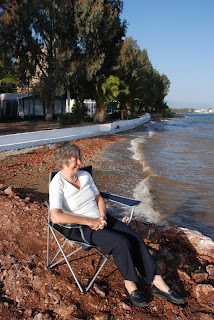 We didn't get far today! We had intended to travel down to the southern tip of Evia but had also spotted that there was an archaeological site in Eretria. I asked the campsite receptionist where it was and he explained that the museum and site were only about a kilometre down the road. We parked just outside and joined the five coach loads of children visiting the museum. Fortunately they had been divided into relatively small groups and we were able to view the excellent museum in a leisurely fashion. We hadn't realised how big a town Eretria was in antiquity and we were given a map of the main open site and other minor areas dotted around the modern town. After looking around one of the residential areas with some very large impressive houses, we set off in search of the 'House of Mosaics'. On the way we came across the Tourist Information Office (just east of the museum on the main road) and popped in to find out more about Evia. They were extremely helpful, told us much about where to go and what to see and loaded us up with very good pamphlets and an excellent map. They also helpfully told us that the House of Mosaics was locked but we could get the key from the museum. I went back to get the key and because I didn't have any identification with me, they came with me to open up. This was a good move as the lady struggled for some time with the second gate pulling and shaking it to get the key to work. It was worth the effort, the 4th century BC mosaics were really good and in an excellent state of preservation. They were housed in what was a very posh house with two courtyards. Apparently, this design of house started in Evia and spread across Greece. The house was effectively in two parts, a public section and a family section.
We lunched on some very tasty giro pittas before completing our round of the sites around the town and then returned to the campsite, completing a round trip of 2km! This time we found a nicer pitch right down by the water's edge with small waves giving us that lovely sound of the sea that would later lull us to sleep.
Photos: The Centaur of Lefkandi in the Eretria museum – his head and body were found in different tombs; The House of Mosaics; A baby tortoise in the Eretria archaeological site; A Shirley Valentine moment at the Milos Campsite.
Posted by Henrietta Hobby at 07:40